What Does Kokikai Mean?

A Kokikai Aikido student recently asked, "What does 'Kokikai' mean?"

Back when Sensei was trying to come up with a name for his new Aikido school, he was in the car with Dan McDougall Sensei on a dark March evening, heading for class in Princeton. Sensei suddenly said to Dan, "Look at the headlights! What do you call what the lights do?" "Oh, well...shine, Sensei?" "No! Another word! Stronger!" Dan ran through a few similes, and when he hit on "radiant," Sensei said "Exactly! Radiating, like nuclear power!"

This is why we usually translate Kokikai as "School of Radiant Ki."

A word on the character 光 "Ko"

This is an ideogram (another word for an ideogram is kanji) that derives from Chinese.  Sometimes, in Japanese, the "Chinese" reading (onyomi) for a kanji is used - in this case the pronunciation sounds like "koh." Sometimes the "Japanese" reading (kunyomi) is used, which here sounds like "hikari." So, if you use Google translator to translate "light" into Japanese, or "ko" into English, this may explain why you don't get the expected result.
kanji kokikai aikido school of radiant ki shuji maruyama

Popular posts from this blog 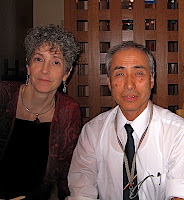 Several years ago I visited Japan for the third Kokikai Aikido International Convention. Because of the language barrier I wasn’t able to talk to very many of Maruyama Sensei’s Japanese students in depth. However, I did spend some time talking to Shuji Ozeki, founder of Kokikai Australia, who speaks English fluently. Ozeki Sensei has practiced Kokikai Aikido for over 25 years. He now lives in Seki, Japan and runs the Ozeki School of Japanese Cuisine.  We immediately slipped into a discussion about the core of Sensei’s teaching, and whether it was different for Japanese or American students. Ozeki Sensei was effusive about the way that Sensei’s teaching has greatly benefited his own life and benefits others by encouraging all human beings to respect one another.

Ozeki Sensei explained to me the Japanese phrase, “Ichi go, ichi e.” I had purchased this calligraphy at a temple in Kyoto. I have heard it interpreted in various ways. Maybe I intuited Ozeki Sensei’s interest in Zen Buddhism w…
Read more 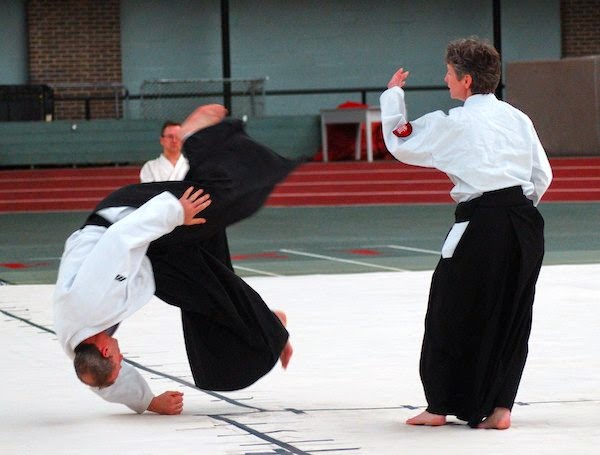 After taking her first classes with Rutgers Kokikai Aikido Club, a student asked, "Do you do conditioning exercises, like pushups, leg lifts or squats?" She seemed surprised when I said, "No," since strength and aerobic conditioning exercises are part of the warmup drills for most martial arts.

Here's why we don't spend time on "conditioning" and "muscle building" exercises in Kokikai Aikido classes:

Kokikai Aikido training is highly-specialized. Black belt instructors have typically trained for a minimum of seven years to gain the level of experience needed to teach. If they have advanced black belt degrees (which many do), they may have been training for 10, 15, even 35 years! (In contrast, you can get a certificate as a fitness trainer in a few days or weeks.) We try to make best use the limited time in class, teaching things that require this expertise. The "strength" that we develop from practicing Kokikai Aikido is not ba…
Read more

Comparing Kokikai Aikido to Other Martial Arts - A Survey 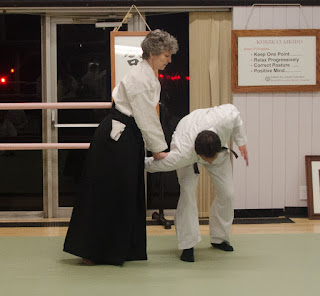 I've practiced the same martial art, Kokikai Aikido, for over 22 years. Even though I've written elsewhere about how to choose the best martial art, I've never tried another aikido style, or even another martial art. I lucked out and landed in a practice that's perfect for me, with a highly effective curriculum, a world-class founder, amazing senior instructors, and I never saw the need to look elsewhere.
Even so, it's always bothered me that a lot of other martial artists consider aikido to be a "joke." I can't speak for other styles, but there's no question in my mind that Kokikai Aikido is effective. Our founder, Shuji Maruyama Sensei, personifies everything that aikido ever claimed to do or be: small of stature, powerful, effective, without harm to opponent. But he's always been reticent about blowing his own horn or putting video of himself on YouTube, so I can see why most people don't know much about him or his style. So, I asked s…
Read more